The objective of this project is to determine in field variability of sugarbeet yield and quality.

Preliminary results showed both sensor systems produce a similar yield pattern. So, the project extended into 1999 and now consists of the following work items:

A scheme of the yield mapping system mounted on the sugarbeet harvestor. 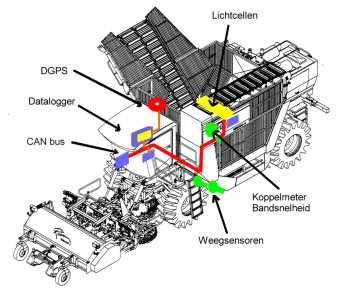 The CAN bus (depicted in Red) connects four modules (purple) with the following functions:

The Differential GPS system is connected directly to the DataLogger. A future modification would be to have the DGPS unit as a fifth module directly on the CAN-bus. This would for instance enhance automatic calibration of the speed measurement systems in other CAN nodes and it simplifies the implementation of the DataLogger functions.

The sugarbeet harvestor busy in a field in 1997. The data logger was initially mounted in the grey box above the right front wheel. Since 1999, the CAN based system is distributed over the machine and the data logger fits well in the operator's cab.

A more detailed experiment in 1999 is shown in this yield map. The manually harvested samples on a number of locations in the field are quite similar to the raw yield points determined by the mass flow measurement system based on belt drive torque. The scales are expressed in ton/ha gross mass.