Two strain gauge load cells are mounted on a frame between tractor hitch and spreader as sketched in the figure below. The entire spreader rests vertically on load cell A, suspended by a reversed parallellogram. Load cell B measures a known load which gives information on vertical acceleration and on inclination of the spreader.

The dynamic weighing filter algorithm consists of a low pass filter for the load cell signals and a proportional correction from load cell B on load cell A. Figure 3 shows the results of filtering and correction of a dynamic signal acquired at 2 m/s driving velocity on rough surface. 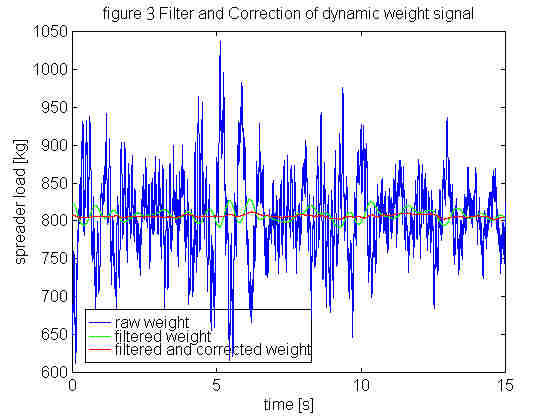 The filter and correction procedure delay is 1 second and the standard deviation of the determined mass is 1.8 kg for this experiment.

From research environment to farm practice

For the 1997 season the above described dynamic weighing system has been implemented on a farmer's equipment. The objectives where to record actual applied amount of fertilizer to be able to relate yield maps to fertilizer strategy in an on farm evaluation of precision farming. 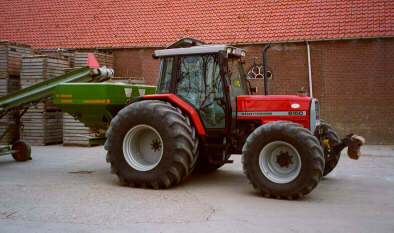 A detailed view on the weight measuring implementation; the orange painted weighing derrick equipped with load cells between the spreader and tractor. 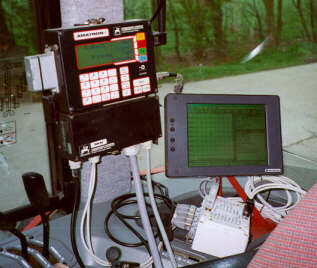 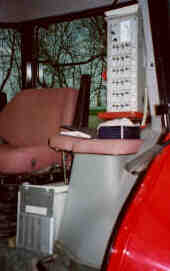 A view inside the tractor cabine. Two computers reside on board; leftside the Mueller Elektronik equipment to control the fertilizer rate dependent of driving speed and to record task data. On the righthand the touchscreen of the datalogging equipment. The datalogging computer is mounted beside the chair; yes, it 's becoming busy in the cab, but luckily a place was found for the strain gauge amplifier on top of the former passenger seat. Finally, the DGPS system was small enough to reside near the computer.

Post processing of the obtained data yielded maps of applied fertilizer. The detailed measurements indicated fertilizer flow actuator malfunctioning which the farmer previously had noticed too. Additional EMC suppression was needed to increase accuracy of the fertilizer rate control.

For the 1998 growing season the strain gauge amplifier is going to be replaced by an integrated sigma delta converter. The system will be modified to be able to connect an Agricultural BUS for electronic data transfer. A Controller Area Network (CAN) node on the spreader performs dynamic weighing and control of the spreader and is connected through CAN to the boardcomputer running a virtual terminal and taskcontroller.

The picture below shows the single board computer to be used as electronic heart of the fertilizer spreader. It features a Siemens SAB167 16-bit microcontroller with integrated CAN bus controller. 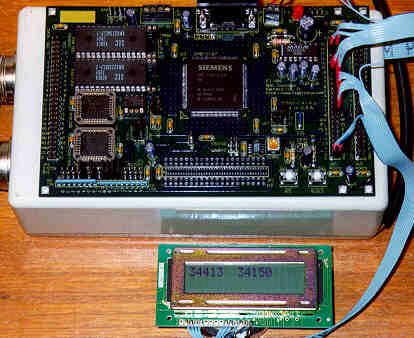